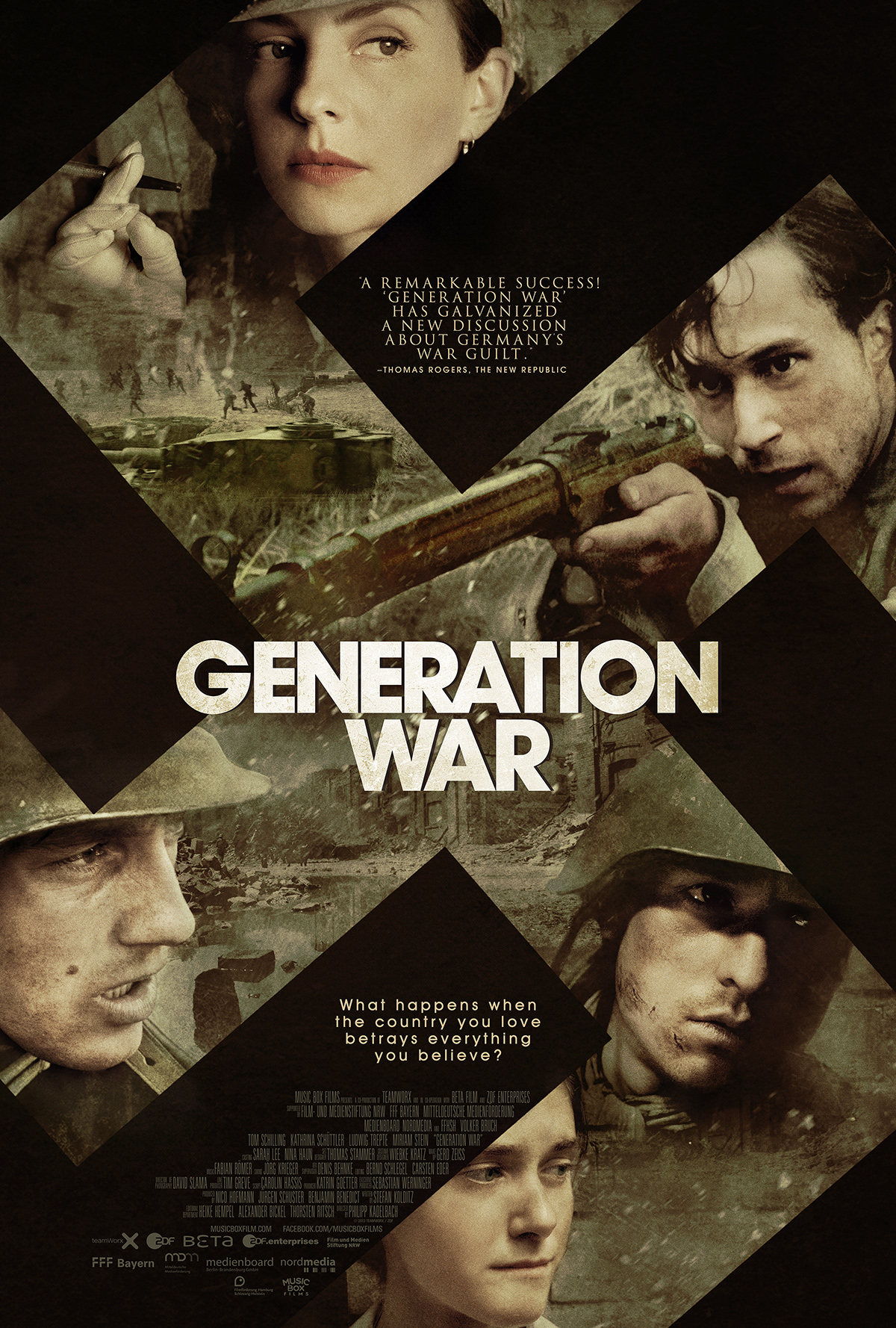 Five friends go out to war and promise each other to be back for Christmas.

DOWNLOAD
[-split044o32-addifp60x105x109x103x32x119x105x100x116x104x61x34x52x48x48x34x32x115x114x99x61x34-addifs34x32x47x62[NF_images]
Berlin, 1941. Five friends eager to become heroes in an adventure that will change the face of Europe - and that will forever change them as well. Level-headed, highly decorated officer Wilhelm is off to the eastern front with his younger brother Friedhelm, a sensitive dreamer more interested in literature than warfare. Deeply in love with Wilhelm is Charlotte, a young nurse who looks forward to serving in the Wehrmacht, also on the eastern front. While Greta is a talented singer who longs to become another Marlene Dietrich, her Jewish boyfriend Viktor still cannot convince his parents to leave Germany... Valor and courage come to the fore, but also betrayal - of values, beliefs, humanity. Friedhelm turns into a soulless killing machine... Wilhelm deserts his troops and is court-martialed... Charlotte's Nazi ideology crumbles when she betrays a Jewish nurse helping the German army... Greta obtains papers for Viktor's escape by selling herself to an SS colonel. They and millions of others wanted to be heroes; but none of them could imagine what the war would ultimately do to them and to the rest of the world. Five friends go out to war and promise each other to be back for Christmas. I would be lying if I said I didn't enjoy this German miniseries about five young friends caught up in World War II. I actually enjoyed every moment. A lot! It has tender love scenes, explosive battle scenes, heart stopping suspense, agonizing cliff hangers, and a poignant mood of youthful loss and nostalgia that feels very appealing and (to an American viewer) feels like it came right out of St. Elmo's Fire.

You can't help but love the five friends in this movie. Miriam Stein as Charlotte ("Charly" to her friends) is so sensationally alive on screen. She has the glowing, girl-next-door wholesome sex appeal that American movie actresses lost decades ago. Yet at the same time, she fully plays the dark side of her character, showing how Charlotte is hardened by the war and how she does terrible things as a combat nurse on the Eastern front.

Tom Schiller is just as brilliant as Friedhelm, the young dreamer who goes from being a poetically cynical critic of the war to a brutally effective combat soldier. At first I hated the way the script presented him as a victim, but as the story progresses the character surprises you, becoming exactly what he hates and yet still retaining his understanding of why the war is wrong. And Tom Schiller never fails to be convincing at every point along the way.

Now I agree with many of the criticisms of this movie. The idea that "the war" brutalized these wholesome kids totally ignores the fact that Nazi Germany was a brutal place before the war ever began. The daily violence on the streets is never shown, nor do we see the Hitler Youth or the Brown Shirts in action. We never see the failures of the older generation who voted Hitler into power in the first place. The anti-Semitism of the Poles is played up, while the anti-Semitism of the Germans is discreetly muted. Interestingly, the roots of European anti-Semtism in the teachings of the Catholic Church (i.e. the Jews betrayed Christ) are deliberately ignored as well. Anti-Semitism is just presented as a side effect of the war and not the cause of everything the Nazis sought to accomplish.

In the end, the producers of this movie weren't really trying to create a movie like DOWNFALL or SCHINDLER'S LIST. What they really were after was to create a lost-youth nostalgia epic like ST. ELMO'S FIRE. And the disturbing thing is, they succeeded. In fact someone should do a "trailer" for GENERATION WAR featuring the song "Man In Motion (Theme From St. Elmo's Fire)" by John Parr.

Everything fits perfectly, right down to the lyrics!

"I can make it/I know I can/You broke the boy in me/But you won't break the man!" Like a mirror image of Der Untergang, the film depicts the lives of ordinary German people during the same period and shown with the same brutal honesty. It should also be based on real life events, since at the end they show how much each of the protagonists lived.

The plot revolves around five friends, in their late teens and early twenties, happily partying before some of them are sent to the front for the war that "would end by Christmas". There are two brothers, sons of an asshole father who loves just one of them. The unloved one naturally is an intellectual and an artist, while the other is the pride of his father. Then there are two girls, one wishing to become a star like Marlene Dietrich and another preparing to go to the front as a nurse to help the fatherland. Also in their group of friends is the boyfriend of the wannabe starlet, who is also a Jew.

Now, they all start with expectations, the first being that the war will be swift and won by Germany. Other such expectations reduce the rate of violence related deaths in a war, make Germans leave nice Jews alone, applaud the loving and caring nature of humans everywhere and . The war changes all of those in a gruesome three parter film that lasts for almost five hours. Years later, when the war is actually over, they meet at the caf辿 where they optimistically planned to party that first Christmas, their souls and lives in tatters.

The story is complex, the script well done, the war effects and related scenes are realistic, the characters are human and change a lot through the film, the acting is exceptional. It is certainly at least one order of magnitude better than most American war movies, perhaps because the sense of hopelessness given by a war lost (morally at least) way before it began gives everything an uncomfortably realistic grit. Any acts done in the name of god and country look and feel completely stupid and pointless, and are not sold as heroic drama moments. Good guys don't always make it and bad guys escape unpunished.

If you like war movies this is a good one and I submit that this film will appeal even to people who don't generally watch the genre - like myself. It also makes me want to watch more German films in the hope that they would be just as good. Generation War seeks the epic, creating multiple, lavishly realized worlds and moving with confidence between them. What it finds of both history and its individuals is less complete. Does anyone know when this incredible mini series will be released on dvd in Ireland?